Why take up rowing?

“Why take up rowing?” – a question even some of the current rowing enthusiasts have asked themselves at some point or other during periods of intense training and desperate attempts to go ‘sub 7 minutes’ when rowing a 2k. There really are so many reasons for taking up this hugely rewarding team sport though, it’s difficult to know where to begin.

For many students, rowing at St Anne’s is the first time they’ve ever gotten into a rowing boat, let alone tried to use a rowing machine, which only adds to the fun and satisfaction as they improve enormously and get to enjoy the first rowing competition of the year – Christ Church Regatta. Indeed, one of the best things about the sport is the fact that most students are new to it and anyone can give it a go. Being a team sport, it’s a fantastic way to make friends with others from across college and a good opportunity for the JCR and MCR students to meet. 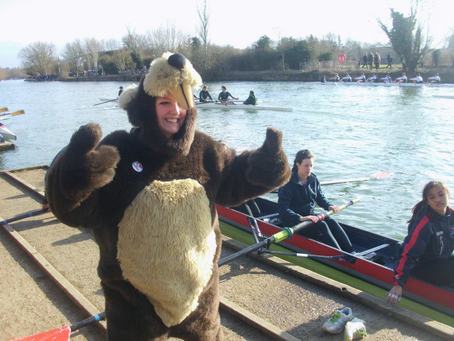 Hannah Morris cheering on W1... in a beaver costume!
Rowing is a fairly demanding sport with lots of training both on land and on the water. Whilst the early mornings aren’t normally top of anyone’s ‘This is why I love rowing’ list, getting up for a 6:30am outing does guarantee a productive day! It’s a great way to stay fit and work on strength, flexibility and to build muscle which other sports would not: it’s often a common misconception that you need ‘strong arms’ to row, when in fact it’s a whole body work-out! And for those who are attracted to the sport but not so much to all the exercise, coxing is a great way to get involved and exploit your assertive side!

Many students give rowing a go at some point during their time here, with many surprised at how quickly they become hooked by it. Whether a keen athlete or someone just wanting to try something new, rowing really does have something for everyone…even if it is, as one of our current first years described, just the opportunity ‘to have more people to sit with at Brunch!...' 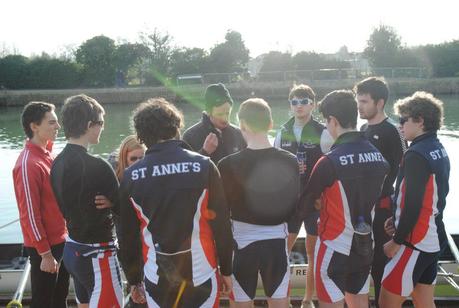